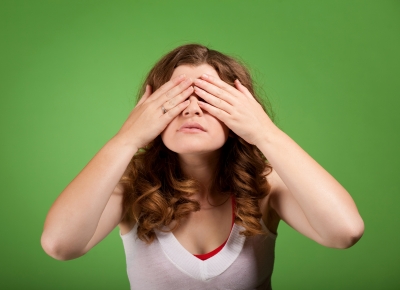 So in part one I discussed the fact that singing with your eyes closed disconnects you from your audience and basically makes them an outsider looking in on your “private” conversation with God.

But let’s face it. Keeping your eyes open comes with it’s own challenges. I know I’m stating the obvious here, but one of the biggest “disadvantages” of singing with your eyes open is that you can SEE everybody. LOL! Yes, this is not always the greatest thing. Because the honest truth is, no matter how good or anointed a person is, there will be people in the audience that are just not with you. For whatever reason. They might not like the song. They may be distracted. Heck, sometimes it’s just good old-fashioned hatin’. It can be somewhat discouraging when you see that from up on stage.
The other challenge is where to look. I already said in part 1 that simply staring at one spot in the room or up at the ceiling isn’t any better than having your eyes closed. You’re just as disconnected from the audience that way as with your eyes closed.

I teach my students a very simple performance tip called the “Four Square” method. It’s a very easy to implement method of connecting with your audience in a genuine, effective way. It will also keep you from staring at one fixed spot in the room. It works like this:

As you stand in front of a room, mentally divide it into four large squares. As you sing, simply move your eyes from square to square, each time focusing just briefly on one person sitting in that area. Simply continue to do that throughout the song. Go to square one; look at the person in the front row. Move your eyes to square 2. Make eye contact with the person in the middle. And so on, you get the idea.

This keeps your eyes moving and keeps you connected with the audience in a much deeper way. More importantly though, it allows God to speak directly to people with the message in the song, through YOU.

So what about those people who aren’t looking very nice? Not enjoying you for whatever reason? There will always be some. That’s just reality. But the great thing is, unless you really need to come see me (smile) there will usually be a lot more people who ARE enjoying you and being blessed. As you continue to rotate through the four squares, simply keep coming back to those people who are being blessed. Clearly that’s who you’re there to sing to anyway.

It’s a very common thing to see Gospel singers do their entire selection with their eyes closed. And honestly, most have very good reason for doing so.  After all, Gospel music is ministry. As such, many well-meaning singers simply want to completely lose themselves in the song and it’s meaning. Their thinking is if they close their eyes and focus completely on God and the message, God will use them to bless the audience. Some others though, close their eyes simply out of fear, nerves or stage fright.

Either way though, singing with your eyes closed the entire time is something every singer should avoid. Ironically the very reason many singers close their eyes is the most important reason they should STOP doing it. Have you ever been in a social setting with two or more people who are having this intense conversation and not involving or addressing you at all? It’s as if you’re not there!
Singing with your eyes closed has a similar effect on your audience. Even though every sincere Gospel singer wants to have a powerful, effective ministry that really speaks to people, closing your eyes cuts your audience out of that conversation and makes it a private conversation between just you and God. The audience, even though many may be enjoying the performance, is robbed of a much deeper connection with you because you’ve made them an outsider “looking in”.

But when you sing with your eyes open- and sorry guys, starring at the ceiling or the clock on the back wall doesn’t count either- I’m talking about making eye contact with members of the audience- people feel a much deeper spiritual connection with not only you but the message you’re portraying in the song. Imagine for a moment that you’re in the audience watching a performer sing. He’s great, and clearly fully invested emotionally and spiritually in the song he’s rendering. His eyes are closed the whole time. You hear him sing “sometimes you have to encourage yourself”, and you nod in agreement as you sway back in forth.

NOW: Imagine the same artist is doing the same song. He sounds great and the spirit is high. He’s engaging and looking at members of the audience as he sings. Just as he comes to the line “no matter how you feel, speak a Word and you will be healed”, his eyes make contact with yours and he points at you. This time tears begin to flow because you KNOW God is delivering a Word directly to you through this artist.

That’s the difference. When you engage with the audience while you’re singing, your message is much more powerful because you allow God to speak directly to them through you. And that’s the whole point of it all, isn’t it?

Now let me just clarify something really quickly. When I say you shouldn’t sing with your eyes closed, I mean just what I said above; that is, not for the entire song. There are moments in a song where it’s perfectly normal to close your eyes for a moment during a high energy or emotionally charged point in the message. Worship songs are also a bit of an exception to this rule of thumb. Typically when you’re singing a worship song it’s being done in an atmosphere or time of corporate worship. As such, most of the audience will also have their eyes closed…..in a perfect world. But we all know that’s not often the case even during worship songs.

Worship songs are different in that they’re really designed to set an atmosphere for worship and communion with God. It’s a lot like the background music at a really nice restaurant. Even so, while it’s maybe more acceptable to close your eyes longer or more often in a worship song, it’s still just as important to be sure to make eye contact with members of the audience from time to time.

Ok so we’ve established that it’s not a good idea to sing entire songs (or even most of a song) with your eyes closed. But singing with your eyes open comes with its own challenges. In part 2  I’m going to share a really neat performance tip you can use to make it easier to and highly effective.