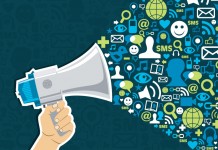 I’m very excited today to introduce my first guest blogger to the family! When a relatively new blog starts to attract people who want to write articles for your site it’s a pretty good sign that your reach is growing.

Boosting engagement and encouraging involvement in your music ministry is hard enough in this economic climate. Throw in the challenge of attracting a younger audience that would rather be surfing the net, and you might think traditional music groups are a thing of the past.

In reality though, this younger audience have one of the most powerful promotional tools at their finger tips. A tool, that you should be using to encourage involvement and make your music group as thriving and lively as it once was.

Social media isn’t just about connecting with friends to plan your next day out. On the contrary, a promotional campaign run via social media can help you attract some new faces to your group – as well as encourage increased involvement from your current members.

Here, we’re going to share with you some top tips for using social media to bring your music ministry to life:

If you’re looking to introduce some new musicians, singers, and instruments into your music group, social media is a great way to spread the word. Whether you have a Twitter, Facebook, or MySpace account, you can tap into your follower base and ask them to introduce new members.

Your follower base will consist of existing members, their friends, and people interesting in music. By making the right noise, in the right places, you will be able to attract the right kind of people to join your ministry.

You could also use specialist forums on relevant websites to advertise for new musicians. As long as they have a thread for your area and type of music, you will be able to reach out to a whole new audience; an audience that might be able to bring an exciting new sound and flavour to your group.

Encouraging involvement in your music ministry starts with making sure enough people attend your group rehearsals. After all, you can have recruited the best batch of musicians, but if they never practice playing together you’ll never create the kind of music you should be.

If everyone is struggling to make rehearsals, you could get together remotely and via a Google+ Hangout. This is a real-time video connection where a whole host of people in a Google+ circle (group) chat face-to-face via the Internet.

You can also use social media to encourage engagement from the wider community, too. Sites like MySpace, Sound Cloud, AAMP, and YouTube are all great places to get your music out there. Whether you think you fit into the mainstream or not, you can use these sites to bring your music to the masses.

Some sites such as YouTube will allow other users to comment and leave feedback, helping you see just how well your music is being received. The benefit of this increased exposure is that it will boost your profile, encouraging existing members to work harder, and attracting new ones.

So there you have it, three simple ways to use social media to encourage involvement in your music ministry. Try them out, and let us know how you get on!

Djembe Drum Shop sells a range of traditional African instruments that can help add a unique touch to your music ministry. To find out more and see what products they have available, visit their website.

Ever wonder why some talented local musicians never find the audience or get that elusive record deal? Or why some signed artists’ careers stall out just past the starting gate? It’s not just “bad luck.” Here are 20 common reasons why some artists never make it to the next level.

1. Poorly-defined goals. Even if they’re too modest to say so in public, successful artists have a solid answer for the question: “What are your goals in the industry?”

3. Lack of musical focus. Creativity is good, but in the mainstream music industry, only artists with multiple past successes have leeway to gravitate toward other musical styles. Different musical genres involve different business contacts and working methods. Artists whose styles are too diverse have difficulty achieving consistent contacts and working methods…and it takes consistency to break a new artist. (Newsflash for artists who think playing a lot of different styles makes them unique: it doesn’t. We see artists with this “unique” talent all the time. In fact most artists can play or sing in more than one style but publicly focus on one they do best.)

4. Poor work ethic. The old saying that harder you work, the luckier you get is true.

5. Waiting to be discovered. People who are “discovered” make it happen instead of waiting.

6. Ineffective artist management, or not listening to good management. It sounds simplistic, but it’s where many artists go wrong. In order to be effective, your management has to know what they’re doing. If you have good, experienced management but don’t listen to their advice, they can’t help you.

8. Signing with a label with inadequate funding or poor distribution. If you want a record deal, the goal isn’t “a record deal.” The goal is the record deal with the most potential for long-term success.

9. Lack of live following. Especially in rock and country, no draw means no deal.

10. Artist “settles” too much; recording quality, image, stage presence, photos, and demo packaging, and overall presentation are all “OK.” Successful artists are more than just OK and never settle for it. Nor do their managers.

11. Poor networking skills. Successful artists constantly seek new networking methods and know how to use them.

12. Hanging onto ineffective band members. Many artists have trouble separating business and friendship, at the cost of their careers.

14. Dated image. If you still dress the same way you did 5-10 years ago or have the same hair style, it’s time to freshen up. If you’re fond of the clothes, wear them on your own time–not when you want someone to invest money in your music being the hottest thing since sliced bread.

15. Lack of radio-friendly songwriting. No hit potential, no deal.

16. Bowing to peer or family pressure not to change. Doing the same thing the same way brings the same results, so in order to improve something, change has to occur; it literally can’t stay the same. But that’s not necessarily a bad thing: if you put icing on a cake, the cake changes but is still the same underneath. (If it’s bad icing or you do something stupid when frosting it, the cake falls apart. Fortunately, that doesn’t happen too often.)

17. Drug or alcohol issues. Many artists with easy access to drugs, alcohol, and groupies at the local level have the distorted impression that they’ve “made it” and lose motivation to go any further.

18. Spouse / child obligations. Putting together an entertainment career is expensive and requires a major time commitment. The same is true of spouses and children. We’re not saying it’s impossible, but it’s definitely more difficult.

19. Impossible to work with. Being impossible to work with doesn’t necessarily mean the artist isn’t a nice person; one very nice artist has had seven managers in the past ten years. We like this artist just fine as a person, but in order for a team to become successful, it needs time to gel. With a rotating litany of band members, managers, and agents, that’s not likely to happen.

20. Not understanding how the industry works. You have to know how the game is played in order to move the right pieces.