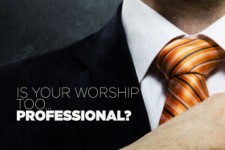 I came across this article on davidsantistevan.com recently, and I was instantly intrigued by the title. The article was a thought-provoking read for me personally, because I believe we often fall short of making the effort to give God our best in the service and presentation of our ministries to His people.

In fact one of my biggest pet peeves over the years has been that thing we have a tendency to say when a a bit more effort is required to perfect a song? Or when a piece is more challenging than usual? When we’re having to press through frustration to get the parts right, memorize the lyrics or just understand how a song flows? You know that bail-out phrase “We ain’t no professionals”.

But there’s a flip-side to that mentality. The other extreme, where we get so obsessed with perfection that we lose sight of what (and whom) this is really about. This article does a great job of really challenging that thin line that separates the two. This one will challenge your thinking on some levels. Click the image below to go to the article. Give it a read and let’s talk about it on the Fan Page. Ever since I started this ministry in 2011 one topic has always gotten way more engagement, shares, likes and comments than any other topic I write about. That would be praise teams, or worship teams. Well after writing articles about them for a few years I’d accumulated quite a few of them. So I asked the fan page community one day if they thought having them in one place would be helpful. The response was unanimously yes.

So I decided to create an e-book compiling several of my most popular and useful articles on the subject of praise team ministry. One thing my followers told me I must do to make this book useful is to organize the articles into categories so they’d have some continuity and be easier to use. I listened intently, and after many hours and many hurdles, it’s here! Praise Team 101 is a reality and it’s available for purchase right now.

Praise Team 101 is a collection of articles offering practical advice for common challenges most all praise teams encounter. I’ve assembled the top 13 articles from my blog- 42 pages in all-into 3 main categories to help you take your ministry to the next level. In fact just to show you how much great content you’ll get in this book and how well organized it is I put together a short video for you that actually takes you inside the book and shows the entire table of contents.

So many of you have been asking for more help with this subject, and I’m really proud and excited to have it ready and available for you. I really believe this product has the ability to have one of the most profound ministry impacts of anything I’ve released so far. To watch the short video and pick up your copy, just click on the link below.

Today’s Music Ministry training resource comes to us from DevelopingWorship.com . I love it when an instructor or coach can break a process down into simple, easy-to-understand steps that are easy to jot down and refer to. If you’re new to the position of Worship Leader you’ll be encouraged by this video. The instructor lists  5 tips for beginner worship leaders and goes into a detailed explanation of each one. Awesome training! Be sure to subscribe to their channel and visit the website. As always, tell them you heard about them from The Music Ministry Coach.com!

To join in the discussion, simply go to www.developingworship.com/forum. Registration is free an only takes a minute to complete. To join in with worship leaders, worship musicians, worship technicians, and worshippers from around the world in this co… 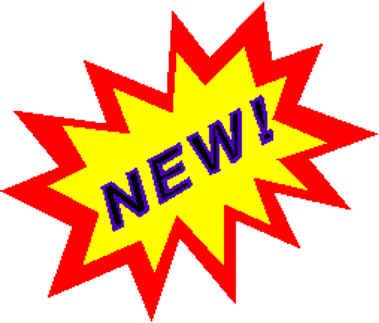 I had an interesting conversation with the praise team last night a rehearsal. We were learning a new song- two, actually. As recently as last week we learned and presented another new song.  About 3 weeks ago, I believe,   we introduced two other new songs. In fact here lately we’ve been introducing new material at a pretty high clip. As we were discussing even more new material we wanted to do soon, I brought up something I’ve actually written about before. In fact I had already decided it would be my topic for today’s blog before I ever went to rehearsal. It is, I told them, exciting to learn and present new material. I love it! But there can also be a downside that can work against a praise team if you’re not careful.

To be fair though, we didn’t all agree on this point.  Some of the members made the point that if we’re doing simple, easy, repetitive songs the audience can and often does catch on and participate. Those kinds of songs, our drummer added, are the best kinds to do, and as long as we’re doing those, he said, it doesn’t really matter how often we’re doing new material. I definitely agreed with him on the point he made about simple, repetitive songs. Our worship leader was in agreement with that also. She pointed out that she had in fact been deliberately choosing those kinds of songs for that particular reason; so the congregation could catch on quickly and participate in the worship experience.

I agreed with all of that, but there was one more point I thought we were missing that you might want to consider with your own praise team. I shared with the group that all of their points were great and I agreed with them. But if we’re doing new songs so often that we don’t get familiar enough with the older ones to do them without a rehearsal, then we’ll always be in place where we can’t just flow in the spirit and still be doing prepared, rehearsed material.

This actually causes us some issues sometimes, particularly when we decide we want to do one of those songs in an up-coming service. We get together and start working on the song, and lo and behold what I thought would take us a few minutes ends up taking an hour. Why? Because we sing the song(s) so infrequently that every time we do them we have to learn them all over again. If we’re doing new material of some kind 2 or 3 Sundays out of a month and there are only 4-5 Sundays available, that doesn’t give us much time for repetition of things we’ve already learned.

A great example of that is the 2 new songs we did 3 weeks ago. They went over great and the congregation loved it. Tore the church up! So much to that the pastor made us do them again the same morning! But guess what? We haven’t done either of those songs again since then, and we’re already doing more new material this Sunday. And when the songs were brought up the leader of one of them could barely remember them. So 2-3 weeks from now when we have our first opportunity to perhaps do one or both of those songs again, how do you think rehearsal will go? And by then, how many times will we have done the ones we’re singing this Sunday? I’m thinking we won’t have done them again. Nor will we have done the new song we just did last Sunday again by then.

I hope my efforts to give you a clear understanding of how lots of new music can actually hinder your praise team doesn’t come across as condescending or in any way some kind of negative opposition to the other members opinions that I shared with you. In fact I thought the conversation was productive and respectful, which I was both proud of and grateful for. It offered two ways to look at an issue that quite often nobody pays attention to at all. And, to be fair, my worship leader has been pushing us to learn and present new material at an accelerated pace for very good reason. Our repertoire was old, stale and ineffective. She’s doing an absolutely fantastic job with the team and we support each other 100%. It is though, something I think all praise teams should be aware of and perhaps discuss from time to time.

I’d love to hear what you think on this issue! Share your opinion in the comment section below. By the way, you can find this article and 12 more like it in my e-book Praise Team 101.