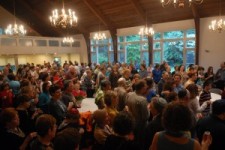 I’m a behind the scenes guy at my church. A lot of what I do shows up in the finished product that is presented on Sunday morning, but I seldom come to the front myself.  But there was this worship medley by William McDowell that I wanted the praise team to sing, and I kinda knew even before I presented it to them that I’d be asked to sing it. His voice is similar to my own so it only made sense.

So I teach the song and everything goes well. Sunday comes and we present it. I begin leading the song and right away I notice only a small handful of the audience seems to be into it at all. Only 3 or 4 or standing, maybe another few that I can see actually closing their eyes and making an attempt to worship. That’s the downside to singing with your eyes open, unfortunately. Sometimes you can “see too much” and discourage yourself.

So we continued to move through the medley and everything went well, but I was discouraged. I had people come up to me and say they enjoyed it, but I personally didn’t feel good about it. I blamed much of it on the audience, and the rest on myself. You see we used to be one of those churches who had “testimony service”. We did it for many years-most of my life, really. So even though we’ve had a praise team for several years now, many of our older saints just don’t “get it”. “We don’t know how to worship”, I told one of the young ministers who was encouraging me.

Then there was me. See Iv’e always had this inward battle about my own singing and whether it’s “hype enough” or “exciting enough”. I struggle with thoughts that my singing is “too calm” or “too boring”.  It didn’t help that our regular worship leader is a powerful anointed singer and woman of God that just electrifies the service every time she sings.

So, overall just not especially having enjoyed the experience, imagine how I felt when our worship leader sends me a text saying she wants me to do it again the following Sunday. I hemmed and haw’d and stated my case, but in the end I promised I’d be obedient. So I’m sitting there on the keyboard that Sunday playing and she’s going forth with the praise team. And just when I’m convinced the spirit is leading her another way she stops down and asks me to come up.

Any time I get up to do something I try to prepare myself mentally and spiritually so I’m in the right frame of mind and I have the right attitude. I just won’t get up in front of people with a negative spirit, I don’t care how I feel personally about what I’m about to do. I call it my 5 Second Rule Of Music Ministry.  So in the few seconds it takes me to get up to the stage I decided that this time I’d do two things. I’d make more of an effort to go deeper into the songs emotionally myself. To make sure I’m actually worshiping, lifting my hands, closing my eyes and talking to God.

But then the second thing I decided to do was to do a better job leading, encouraging and guiding the audience in worship. So right away when I took the microphone this time I began to just talk to them about worship, encouraging them to surrender all they had been through that day, even the previous week. I began to explain to them that worship isn’t something that “happens to you”, it’s something that you do.

I began to sing, this time moving my hands more, lifting them more, talking to the audience more. This time the atmosphere was different. There were many more people worshiping. Many more standing, lifting their hands. Many more who were seated were doing the same thing. The atmosphere was filled with a spirit of worship. Even when the pastor came up, which was much later, the praise and worship portion of the service was still on his mind. He began to talk about the songs we sang and the kind of worship we offered, referring to it as a “slow rain”. In fact I ended up going back into a portion of it again by his request.

So now, thinking back on it I realize that it wasn’t necessarily the audience that had the problem the first time, it was me. It wasn’t them that needed to surrender, it was me. It wasn’t them that wasn’t worshiping, it was me that wasn’t. I learned that day something I really already knew. Something I’ve said to others before. Simply, that when you stand before God’s people you have to give God your best. It has to come from a pure place that isn’t influenced or affected by what the audience is doing- or not doing.

Because the truth is even in the second performance of the medley there were still people who weren’t really into it at all. And there always will be, in every performance; for all of us. But the solution is not to simply keep our eyes tightly closed for the entire thing and ignore the audience entirely. The solution is to sing from the purest place you can, giving God the best praise or worship you can. Connect with and focus on those who are with you and being blessed. Avoid focusing your attention on those who don’t seem to be interested, and don’t take it personally. Doing so could cause you to miss being a blessing to someone else. Or worse yet, miss being blessed yourself.

Ever since I started this ministry in 2011 one topic has always gotten way more engagement, shares, likes and comments than any other topic I write about. That would be praise teams, or worship teams. Well after writing articles about them for a few years I’d accumulated quite a few of them. So I asked the fan page community one day if they thought having them in one place would be helpful. The response was unanimously yes.

So I decided to create an e-book compiling several of my most popular and useful articles on the subject of praise team ministry. One thing my followers told me I must do to make this book useful is to organize the articles into categories so they’d have some continuity and be easier to use. I listened intently, and after many hours and many hurdles, it’s here! Praise Team 101 is a reality and it’s available for purchase right now.

Praise Team 101 is a collection of articles offering practical advice for common challenges most all praise teams encounter. I’ve assembled the top 13 articles from my blog- 42 pages in all-into 3 main categories to help you take your ministry to the next level. In fact just to show you how much great content you’ll get in this book and how well organized it is I put together a short video for you that actually takes you inside the book and shows the entire table of contents.

So many of you have been asking for more help with this subject, and I’m really proud and excited to have it ready and available for you. I really believe this product has the ability to have one of the most profound ministry impacts of anything I’ve released so far. To watch the short video and pick up your copy, just click on the link below.