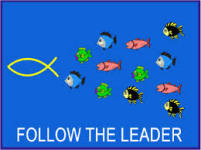 One thing I tend to stress often with you guys is the importance of really knowing your songs. I mean moving past that “I know it well enough to follow the director” stage we’re all content with. I mean really knowing the song. I’m talking about having the lyrics memorized, not this thing where we’re nervously depending on the director to feed us every line. I’m talking about really understanding the format of the song and how it moves from one section to another one.

But perhaps I haven’t really made a strong enough case for why that’s important and how it benefits your ministry as a whole. Quite simply, the more thoroughly you know a song the more powerfully you’ll minister that song. Something happens when everyone in the group is absolutely certain about every part of a song they’re about to sing.

There is this cohesiveness there. This sense of unity. Everyone is with one accord. And we know the Holy Spirit moves when we’re with one accord. So in moments like these powerful, anointed, spirit-led moments of music ministry tends to happen. But they only happen because we’ve eliminated all mental distractions that normally hinder our spirits from really surrendering completely to God.

When we’re unsure we’re really too distracted with the task of getting through the song without mistakes. So nobody can really follow the leading of the Holy Spirit. The director can’t, the song leader can’t, the group members can’t. Because we’re all too busy nervously getting through one section after another.

We become locked into predefined repetitions and formats that we can’t deviate from because everyone is so unsure that if we do there will be some kind of mistake. But when everyone is absolutely on point with every part of the song, there is a freedom that takes place spiritually. In moments like these the Holy Spirit often takes over and leads the director or the song leader.

We did a song Sunday morning that we’ve done many times, called God Is Able. One of those churchy, hand-clapping, foot-stomping songs. So we know it very well. I was directing the choir. We came up to this one part in the song where we would normally repeat it a couple of times and go back to the chorus.

But this time the Holy Spirit started dealing with me and I just didn’t feel led to move from that spot. . So I just kept having them repeat that same two lines, right where we were:

I just kept repeating it and it seemed like the more we repeated that phrase the higher the spirit got in the sanctuary, until everyone was just going in. Well, the whole format changed from there, because at that point everyone was following me, but I was following the leader. We never went to the real vamp of the song. That became the vamp and I just let God have His way right there; with me, the band, the leader and the choir.

We didn’t do anything that morning the way the song normally goes or the way we rehearsed it. But I had the freedom to allow God to just guide me in the direction He wanted the song to go because I know the choir and musicians knew it well enough to follow. I also knew the leader was skilled enough to just flow in the spirit right there, and would have no problem ad-libing as long as the Holy Spirit needed us to. So we all followed the leader. The ultimate leader.

Have a great week!
Ron
Ps. What if you were leading the spirit took over? Could you keep going as long as the spirit needed you to? Would you run out of words, or become anxious or irritated that the director got happy and won’t stop? If so, I have something I’d like you to see. Take a look here. 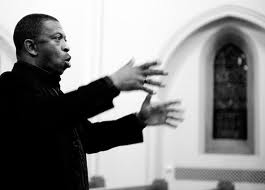 If you’ve never walked down to the front of the church, centered yourself on that choir and felt the pressure of every person in the audience at your back and every member of that choir hanging on your every movement, you might think directing a choir is much easier than it really is. And yet, in churches all over the nation and even abroad, people are finding themselves being thrust into that position without really being prepared for what it takes to really be effective at it.

As choir director, when you have a new song to direct with the choir, it’s imperative that you know that song inside and out. If you don’t, you can’t give clear direction. Now, the more you know the more effective you are. But at the very least the choir director absolutely HAS to know:

A) The format of the song. This is how the song flows. What happens first. What happens after that. How many repetitions is that sang? Where do we go after that? We’re speaking of course of the various parts of a song and how they are arranged. The most effective way to learn this is to sit down with the song and write it out. Make notes of the various parts of the song as they happen, and label them. Use notes or brackets or asterisks- whatever you relate to the most – to help you remember what happens when and how many times it happens before going to the next thing.

b) The choir’s lyrics. As the choir director you absolutely MUST know everything the choir has to say and exactly when they need to say it. If you can also know what the leader says, that’s great. But generally just knowing when the leader comes in and when the choir comes in is enough. The leader usually understands that learning his/her verses is his responsibility and as such, isn’t often looking at the director for words.

The choir director is called by that name because that’s exactly what that person is doing. Giving directions. It’s no different than when you ask someone to drive you some place they’ve never been. You must communicate ahead of time and in a clear manner when you want them to turn left or right, and where. In other words, you don’t wait unti the driver’s bumper is approaching the street you want and then yell “TURN HERE!!” . This is a common mistake most new directors make.

To be effective in leading your choir you must do with them the same thing you do when you’re giving someone directions in a car. You must think “down the road” a little musically. Just like you say to the driver “ok not this street, but the next street, turn right”. Or “get in the left lane, we’re going to be turning at that next light”. You can only do that because you’re thinking ahead of the car. In a similar way, effective directors think ahead of the music and give signals or gestures that clearly communicate to everyone what’s coming up next.

A good director makes sure he has the attention of everyone involved before he makes the gesture to start that next thing, whether it’s another verse or simply to come out of the vamp. He quickly scans the choir, the band and the leader looking for eye contact so he knows everyone is aware. His gestures and/or facial expressions tell everyone “we’re about to do something different, watch me”.

3. Understand How Music Is Measured, Or “Counted”

This one confuses a lot of new choir directors. Have you ever seen a choir director who clearly gave the direction to go to the next thing, gave it early enough, did everything right, but somehow it just didn’t happen right? It felt awkward, like you knew what to do but couldn’t do it right there? That happens a lot when a choir director gives the right command at the wrong time. Music is very repetitive. It repeats, usually in cycles or multiples of 2. For example if something is being repeated, it will repeat twice, 4, 6 or 8 times. Sometimes if you give the command to do something on an “odd beat” your musicians and choir will have a hard time carrying it out for you simply because the rhythm was thrown off.

Gaining a better understanding of this “count” or rhythmic flow and how it works can be as simple as listening to the song, counting and tapping your foot along with the beat. This could get pretty deep so I won’t go into much detail here. But a good director either has that sense of timing naturally or needs to learn it by learning just a little music notation. You don’t have to learn how to read music, just how to count it. Look up how to count “bars” or “measures” on the internet. In fact maybe I’ll do a YouTube video on that soon.

4. Be Consistent; Use The Same Gestures All The Time

The word “gestures” here refers to the actual hand and/or arm movements you use to tell the choir what you want them to do. Every director is different and has their own style. However I always recommend that directors use as much as possible, gestures that have become somewhat “universal” among Gospel Choir directors. Placing your hand over the top of your head to signify “Go back to the top of the song”, or pointing your thumb over your shoulder to signify “Go to the vamp” are just two examples I can think of.

The most important thing is to make your gestures easy to understand and as obvious as possible. If you find at rehearsal that people are constantly missing the cue even when you give the direction in plenty of time, you may need to explain to everyone what is expected when you use a certain gesture. For example “when I make this circular motion with my finger it means I want you to repeat”. Just holding up a peace sign could mean “go to the verse” or it could mean “two repetitions left”. See what I mean? So don’t be afraid to explain what your gestures mean. Your choir will appreciate this because it helps them understand and execute what you want.

The most important thing you can do though, is be consistent. Use the same gestures for the same things all the time. This way everyone in the music department becomes familiar with them and knows exactly what you want when they see one of them.

There are so many things we could discuss about being a great choir director. This is by no means meant to be a complete study of the subject. These 4 steps however, will take you a long way towards becoming an effective choir director. If you’re new to the position of choir director and would like some one-on-one coaching/mentoring, you can either book Ron Cross or Book Shena Crane for private coaching any time. We can help you get ready for your first song or just become a better director in general.