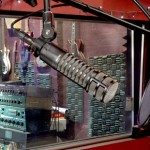 Most singers make a very distinct difference between what they do and what a piano player, saxophonist or guitarist does. ” I’m a singer, he’s a musician”. “I don’t play any instruments, I just sing”. However, the two are very much the same.

Let’s say I had two pieces of sheet music for “Somewhere Over The Rainbow”. One is written for a saxophonist to play the melody line, the other for a vocalist to sing the melody. What would be the difference between the two pieces of music? Only one. The singer’s sheet music would have the words below the notes. Everything else would be exactly the same. The notes on the sax player’s music would look the same as the singer’s sheet music.

The difference is the instrument being used to create the notes. Why is that important for singers to understand? Very simple. If you as a vocalist can begin to really see your voice as a musical instrument, then it begins to change the way you think about what you do. Many singers are very passive about their craft. I suspect it’s because most singers are born with most of their talent. “I know how to sing, that’s all I need to know”.

He hones his craft constantly. The musicians who excel on their instruments ( over others who play the same instrument) are those who know the most about their instruments and have learned to master them by getting to know them inside and out. That and of course, lots of lessons and lots and lots of practice.

It should be the same with you if you’re a serious vocalist or hope to be someday. For example, you may be a soprano who leads that Yolanda Adams song with the church choir. But you really have to scream that high note to hit it, and once you’re done you’re wiped out. You’re hoarse for the rest of the day; sometimes several days.

Yet when Yolanda sings the same song she’s smiling the whole time. Then she goes on to sing for another 45 minutes straight after that! And that’s just that night. She has engagements every day for months lined up. Years for some artists when they’re out on tour.

How is this possible?! After all, you were both born with the gift to sing, right? There’s no denying different singers have different levels of God-given ability and range. And there are some people out there that defy logic. Some people are just flat-out anointed. But there is usually a much simpler explanation.

The simple answer is usually that these singers have learned some things about her voice, how it works and how to use it properly, that you don’t know. Recording artists are faced with a very stark reality once they get signed. They must either learn everything there is to know about their voice, how to master it, get the most out of it and most of all, protect it so it lasts them for many years- or be faced with a very short career.

So the big secret in the recording industry is that almost everybody takes lessons. Many don’t want the general public to know that, so you won’t often see the names of vocal coaches in the liner notes among the “thank-you’s”. But I digress (he says pouting).

So my “homework” for this week is to start thinking of yourself as a musician. You play an instrument, the instrument is your voice. Every musician should learn as much as they can about their instrument. Unless of course, your instrument is simply a hobby or something you do to relax.

If it’s more than that to you, stop accepting your limitations and start asking some questions about how to overcome them. You’ve seen people sing high notes effortlessly. You’ve seen recording artists sing for an hour straight. You know something’s going on, what is it? What do they know about their instrument that you don’t know about yours? What have they done to be able to do what they do, that you haven’t done?

I have to be honest with you. I’m not sure many people really know what they’re asking for when they’re seeking God for a hit song. A song everyone wants to hear you sing, everywhere you go. Sounds really glamorous doesn’t it? Well, as someone who has been there, let me tell you it isn’t.

I was asked to lead a song a few years ago that I liked ok enough, but I didn’t have a real spiritual connection with. It didn’t really resonate with me deeply. But it was churchy and up-beat, and I was a good fit for the lead. Besides, there was really nobody else at the time that could, so I stepped up to do it to keep us from having to scrap a song that everyone in the choir wanted us to do.
Well, I gave it my all and God came in and really blessed. And then something happened I wasn’t prepared for. The whole congregation fell in love with the song, especially the pastor. You see every time we did the song we were guaranteed some high-spirit churching. So for the next couple of months at least ( it felt like a couple of years) that song was requested at least 2, sometimes 3 times a month. And each time they expected me to do everything I did the first time I sang it.

It got to the point I was just really sick of doing the song. I still can’t bring myself to do it when they ask occasionally. But this brings up a pretty serious delimma, doesn’t it? I mean after all, this isn’t just any music, this is the Gospel we’re talking about. Songs might get old, but the Word Of God is timeless..right? The message doesn’t get old.

Still though, this is a very, very real issue that should concern you if you’re a serious vocalist working toward a full time ministry. You’re definitely gonna have to sing songs again and again again; unless of course you don’t plan on having any hits whatsoever.

How do you deal with that? What do you do when the song gets old?

Honestly, there’s not much you can do. And that is why you must never allow it to. How do you avoid that? By very strictly and adamantly avoiding singing any song that you don’t have a strong spiritual connection to. Any song you’re going to sing must resonate with you on some level. There has to be something in that song that is for YOU.

When you’re singing a song that ministers to you on a deep personal level, that song will never get old. Because first of all, it will always speak to you that way, even if your situation changes. In that case the message goes from “where I am right now” to “where God brought me from”.

But the most important reason of all to make sure you do NOT sing songs that don’t resonate with you on a deep spiritual level, is because if you allow yourself to do so, then every time you sing it you’ll be singing from a place that isn’t true, honest and authentic. And no matter how many accolades you’re getting, that’s gonna get old real quick.

So no matter what the situation is, if you’re serious about your ministry as a singer, you must say NO if you don’t feel it. Yes, that’s gonna be irritating to some people sometimes. Yes it’s gonna put your choir or praise team or group in a bind sometimes. But this is simply NON NEGOTIABLE as a Christian or Gospel singer. You have to sing from a real place. If you don’t, you’re just performing. And that gets old.