You’ve heard me say it before if you’re a regular reader, but every singer should at a minimum be able to tell the musician what key they sing a certain song in. Especially in Gospel churches where most music is done on the fly and you often don’t know who’s playing for you. Knowing what key you’re going to sing in insures that you won’t start in a key that’s too high or one that you haven’t been practicing in. We’ve all seen that happen and it ain’t pretty!

Even if you’re not interested in learning to actually play, learning your keys on the piano is easier than you think. In fact if you can say your ABC’s (you don’t even need all of them, just the first 7) and recognize a very simple, very repetitive pattern, you can learn the keys on a piano in minutes. Look at this graphic of a piano keyboard. 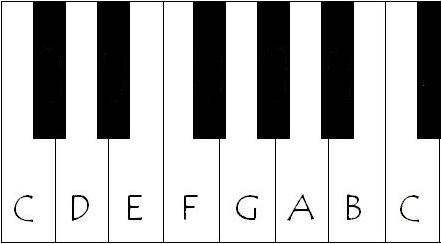 Once you know where the key of C is, it’s as simple as pressing down the next white key and saying the next letter in the alphabet. Look at the graph again: C, D, E, F, G, A, B, C. We started over at A when we got to G because in America these are the only letters we use in music.

If you have a pretty good ear- meaning you can listing to music and find that key on a piano, then now you know how to identify what that key is so you can tell a musician. But if you can do that, then why not take it one step further and just learn how to play! Learning to play keyboard will absolutely transform your singing, and you can learn it on line.

By far my top resource on-line for learning about piano, no matter what level you’re on, is HearAndPlay. These guys have a ton of free information that will help anyone at any level understand more than you ever thought you could about playing the piano. It’s really a good thing to be on their mailing list if you’re someone who is serious about learning how to play. You can get some free lessons just by visiting this link. Check it out!
Free Piano Lessons