Ad-libbing, by definition, is the art of making it up as you go. In Gospel music it’s often referred to as “pressing”. Many would-be lead vocalists, in fact, avoid leading songs at all simply because of they don’t think they’re good enough at ad-libbing to “carry” the song .

It is one of the most feared tasks many singers face in all generes of music, not just Gospel. But it doesn’t have to be! What if I told you you could become almost instantly better at doing ad-libs without taking a single lesson or doing any studying beyond what you’re about to read here?
What I’m about to share with you is one of those “well guarded industry secrets” that, once you know it, you go….”that’s it???” It’ll seem painfully obvious once you read it.

I don’t have to tell you that what scares people about ad-libbing is having to make things up on the fly, in the middle of a performance, in real time, right in front of everybody! That’s a lot of opportunities to stumble or get tongue-tied, freeze up, go blank, etc. That’s exactly why most professionals don’t, and you shouldn’t either.

If you’re a regular follower of my blogs, you’ve seen me talk about the importance of being prepared and well-rehearsed. Knowing as much as possible in advance. Nowhere is this more important than in ad-libbing. The “skill” is a nice one to have, but it’s importance is way over-rated. It’s way more important to nail that song without any mistakes, than it is to be really good at making stuff up on the fly. At the end of the day nobody knows or cares if you’re making it up or if you wrote it all down a week ago.

So the secret to great ad-libbing is to do the exact opposiite of it’s meaning. Write your ad-libs in advance! Yes, I know that’s a direct contradiction of the very meaning of ad-lib. But consider this. If you’re doing a song where you know you’re going to need to ad-lib, and you know you simply don’t have have the mental quickness and confidence yet to make it up as you go (and the thought of trying scares the crap out of you ) then what makes more sense than writing some stuff out in advance?!

First of all, as I always say, the more you know in advance the better you’re going to perform. You’re going to be less nervous, more polished, more comfortable.

Secondly, nobody in the audience will know (or care) that you wrote your stuff out in advance. They’ll think you’re awesome.

So the next time you’re faced with singing a song where you’ll have to ad-lib a lot, sit down with a pen and pad, and write down as many lines as you can think of that would fit the subject matter you’re singing about.

Rehearse these lines and get familiar with how you want to sing them in the song. There’s no need to rehearse and memorize them in any certain order. It’s really about having a pool of material to pull from that you’ve come up with in advance so you don’t have to come up with it live in front of an audience. Not about memorizing a complicated sequence of lines in a certain order. That’ll just make you more nervous.

In fact the more random the better, in my opinion. I personally don’t like to hear a person rhyming in their ad-libs. It sounds too rehearsed and to me, makes it really obvious they wrote them in advance. Stay away from that and you’ll sound like you’re making it up as you go.

The cool thing about this is that over time you’ll build up a sort of “mental rolodex” of material you can draw from at any time. it’s a lot like scripture in the sense that what you hide in your heart is there for the Holy Spirit to bring back to your memory when you need it. So in time you’ll be able to truly make it up on the fly, right out of your spirit.

But until then, if you want to be instantly better at ad-libbing, don’t try to make it up live, writing some things down will definitely help at least alleviate some of the fear you have of ever stepping out there to sing. If you’re someone who has tried that before and were unsuccessful, you may be wondering what else you could do in the meantime to help you get to that place I mentioned above. After all, just writing stuff down and memorizing it doesn’t work well when you’re new to ad-libbing and leading songs.

You’re already afraid and nervous. You’re bound to go blank sometimes just because you’re nervous. I’ve actually thought a lot about this over the years, and I’ve seen so many people that have this same fear.  So I wanted to do something to help people get past that initial stage, overcome their fear and get started. So with the help of the Lord I created a step-by-step, paint-by-the-numbers system. I explain the details in this 5 minute video you can view here: 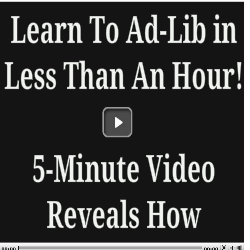